Tailgate lids make use of the otherwise inaccessible storage space in the body cavity of the tailgate while also reinforcing the structure to make the gate stronger. By cutting a large hole in the inner face of the tailgate you can bolt these lids to the factory mount points, reinforce the gate, and get more storage.

Strength
a common concern that people have is they think that the tailgate lid will weaken the tailgate surface.
This is one of my favorites:
Can I still sit on the tailgate?
Yes!

What good is a tailgate you can’t sit on!:D

I designed the lids to make the tailgates stronger than they are in stock format. The 60 and 80 series trucks are both prone to having caved in tailgates and my original lid was made to help fix that problem on my truck.
The tailgate lids are strong enough to pull the bent tailgates back into shape.
Anything you can currently do with your tailgate you can still do, plus some.
You can fit as many friends on there as you want and all jump up and down.

My construction details make this possible.
The tailgate lids are not just a flat plate that bolts to the deck.

The inside of my frames are fabricated with a lip of .1875″ x .75″ cold rolled steel. On the door lip edge this then has an additional .375″ x .375″ bar welded to that for the lid stop and to further reinforce the lip. On the hinge side I custom fabricate a continuous stainless steel hinge that is welded to the lip, further reinforcing that edge.

All these parts are welded together on a heavy fixture that forms the pieces to have a slight upward curve to the entire tailgate lid. This vaults the center of the lid so that when it is bolted down to the tailgate it compresses into shape and makes sure the whole unit becomes a rigid whole.

All this means that you can support any of my tailgate lids on each end and stand on the unsupported middle. 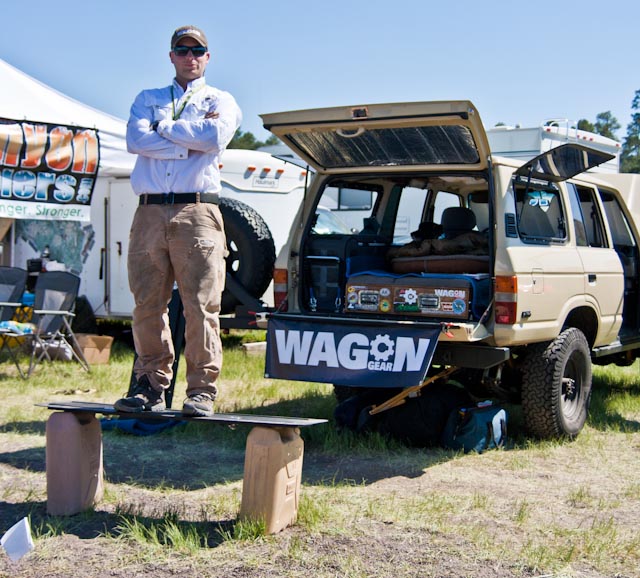 I can even jump up and down on it. 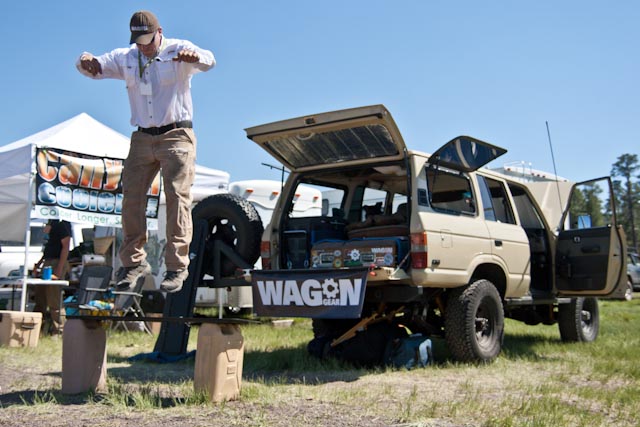 Hinge Direction
Another common question is regarding my choice of hinge direction. I am the first to admit that on paper it makes more sense to hinge the tailgate lid the other direction, and the first lid I made for myself that’s just what I did, but as soon as I started using it I ripped it out, cut the hinge off and welded it on the other side, haven’t looked back since.

The short answer is that it just works better that way.

After trying both directions these are the things that I found:
The best thing about the lid folding out is that it facilitates using the open lid as a table/place to put things removed from the box while trying to get the buried things out.
Whenever I need something out of there, it is almost invariably underneath everything else. In the situation pictured to the right I had stored the clamp head for the hi-lift in there down in one of the lower corners, I then forgot which corner, so I ended up unpacking both of them….

In this orientation the lid can also be opened fully, regardless of what is in the back of the truck, like drawers, a fridge, other cargo, etc.
For those that have cargo drawers, outward opening allows the drawers to be partially or fully opened depending on clearance even if the tailgate lid is open in order to snag something quick from the back of the drawer.

On top of those things is practicality of construction. If you look at the lid frame you will notice that the inside corners have a radius and the outside ones do not. By putting the hinged edge on the top/outside I can run the hinge right to the end of the plastic rather than have a floating termination that would be weaker.

The theoretical downside to this hinge orientation is that it limits opening the tailgate lid while closed. After thinking about that during the design I felt that this was actually a good thing because in all likelihood if the lid were opened when the tailgate itself was vertical, anything stowed within would most likely come tumbling out.
I could also not think of many situations where you would be inside the truck and still even be able to open the tailgate, most instances there is something in the way of the door swing; cargo, bedding, cargo drawers, boxes, or the fridge.

And as far as limiting access by opening toward the user, without the scale of a user it may look like it would be in the way, but the lid only protrudes into the user space about 7″ (there is overlap on the tailgate itself). Minimum comfortable standing work distance will be approximately the length of the users forearm, not many users are likely to have a forearm shorter than the 11″ lid so it is virtually impossible to be in the way during normal use.

See Jonharis’s photo here for reference, everything in, on, and around the tailgate is still within easy reach: 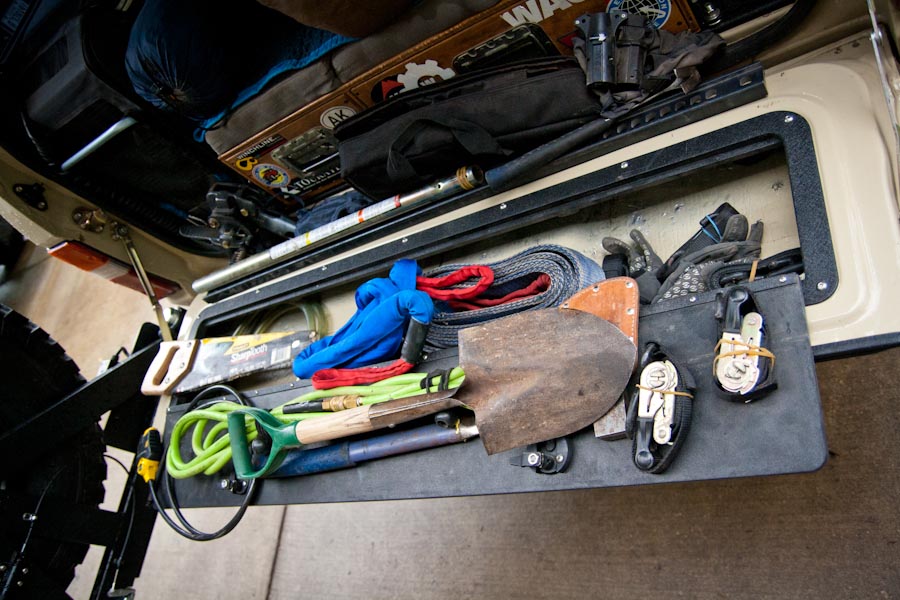 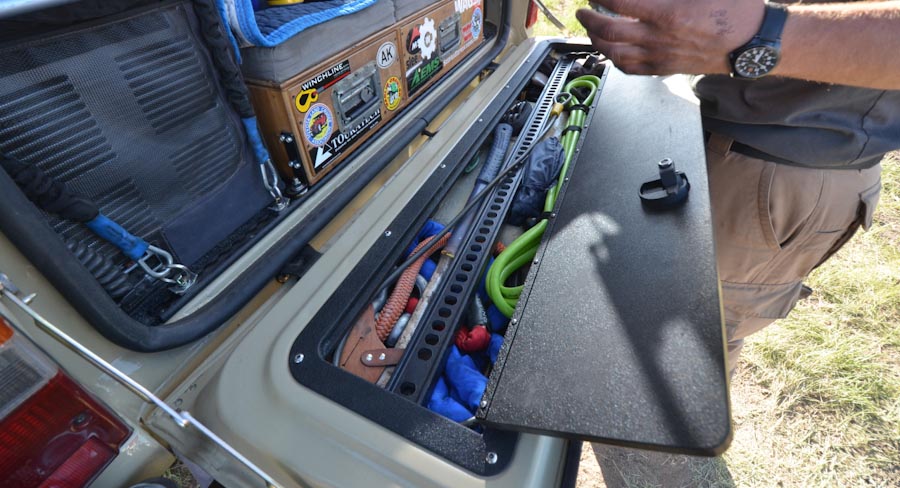 One of my customers who asked about the hinge sent this note after installing his lid:

btw – after seeing the tailgate – if someone ever asks like i did about reversing the hinge, don’t give the option of flipping it. the design is great.

That tends to be the typical response, I’ve never had anybody think that it should go the other way after actually using the lid, quite a few people have asked about this, but after they have used the lids it doesn’t present an issue any more.